Why Gareth Southgate needs EQMS for the 2018 World Cup

The 2018 World Cup kicks off in Moscow in 23 days, as the hosts Russia take on Saudi Arabia.

For England supporters, like us in the Qualsys office, the real excitement begins a few days later as England face Tunisia in Volgograd.

But after that match against Iceland at Euro 2016, the usual pre-tournament English optimism seems somewhat dampened. We all know, deep down - we haven't got much chance of lifting the trophy.

In fact, after a seemingly endless pattern of exiting the World Cup by the quarter-finals, the time's never been better for England manager Gareth Southgate to build a quality management system into his squad.

We'd love to help England win the World Cup; here's how our software could do it. 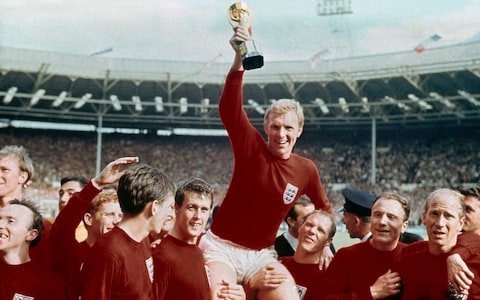 Could be worse - but watch out for the Belgians

Panama are ranked at 55th in the FIFA world rankings - and shouldn't pose too much of a threat. Tunisia are ranked 14th, right behind England. Belgium, though, are ranked 3rd, and can call on De Bruyne, Hazard, Kompany, Lukaku and other Premier League big-hitters.

It's obvious that Gareth Southgate needs a robust risk management strategy if he's to get England out of the group stages.

Identifying, analysing and evaluating the level of risk each opponent entails and prescribing an effective treatment is vital for business, and football is no different. 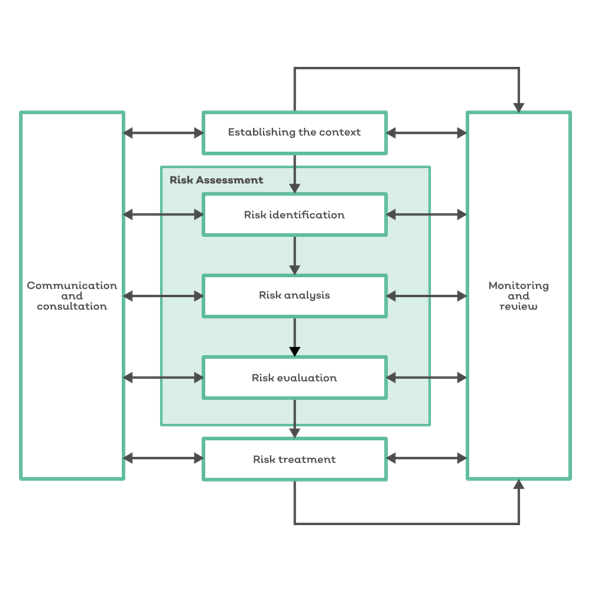 Southgate will have to find a solution to De Bruyne's assisting ability and Hazard's attacking power. He could use Qualsys's risk management module to build a risk register, taking advantage of his unlimited free end users to get input from the entire squad, identify potential threats and set an appropriate treatment - drilling Stones and Walker in specific exercises on the training field, for instance - to lower the residual risk score to an acceptable level.

Then, in a more offensive vein, he can uncover the 'positive risks' or opportunities that can be exploited for victory. Kompany and Vertonghen are reliable defenders with plenty of experience of top-tier football; Ciman and Kabasele are weaker and could be a point of focus for England's attacking players.

Opportunities are sometimes neglected, but are just as important as risks. The England squad has been defensively sound in qualification - but what about attacking creativity?

Effective training is the key to a successful football team. With Training Manager, Southgate could instantly check for training gaps in his squad in a single live report and bulk schedule training sessions accordingly.

With automatic notifications, email integration and feedback forms, he could ensure nobody misses a session in their scheduled training pathway while collecting feedback for continuous improvement. Has Sterling practiced his crosses? Has Kane practiced his free kicks? How do they feel about their progress so far and what else needs to be done before the big day?

By identifying weaknesses in his squad and addressing them, he can boost the quality of his entire workforce, making them more efficient, competent and confident to perform their individual tasks. 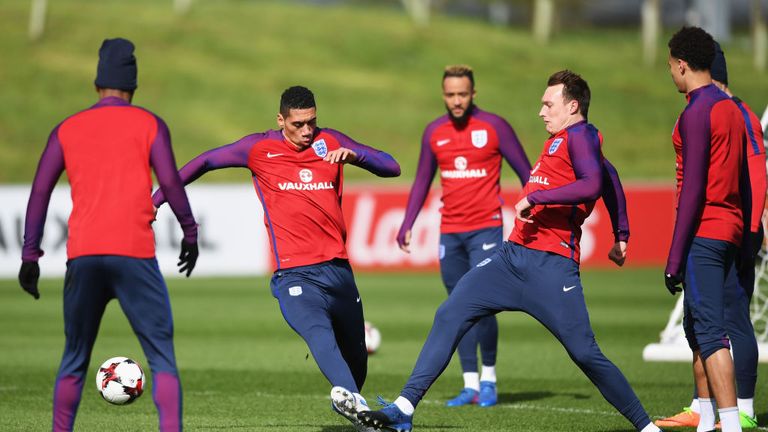 Complete, trackable training records are crucial for identifying and maximising individual skills and competences in any team

Accidents happen both on the training pitch and the real thing. Whether it's a bad tackle or a hamstring tear just waiting to happen, injury of the wrong player at the wrong time can completely alter the ability of a football team to operate effectively. 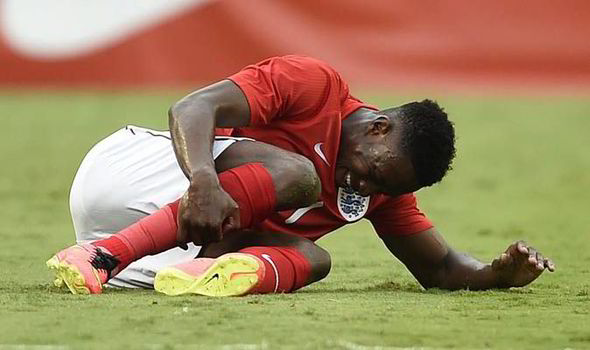 Mr Southgate could use Issue Manager's accident and incident management and corrective and preventative action management features to build a complete contingency plan should the worst happen.

The England management could build automatic, trackable workflows for substitutions, medical attention from the physio team, post-match care and return to action, attaching relevant documents like medical information to track progress and notifying the relevant personnel at each stage to drive action.

Every good manager needs to have a feel for how his entire team is progressing and should identify weaknesses and areas of concern quickly and easily.

With mobile auditing on his iPad, it's a simple matter of standing at the touchline and recording his findings with custom form fields. Then, once he's back in the office, he can upload the completed audit checklist straight into the main system and address them. 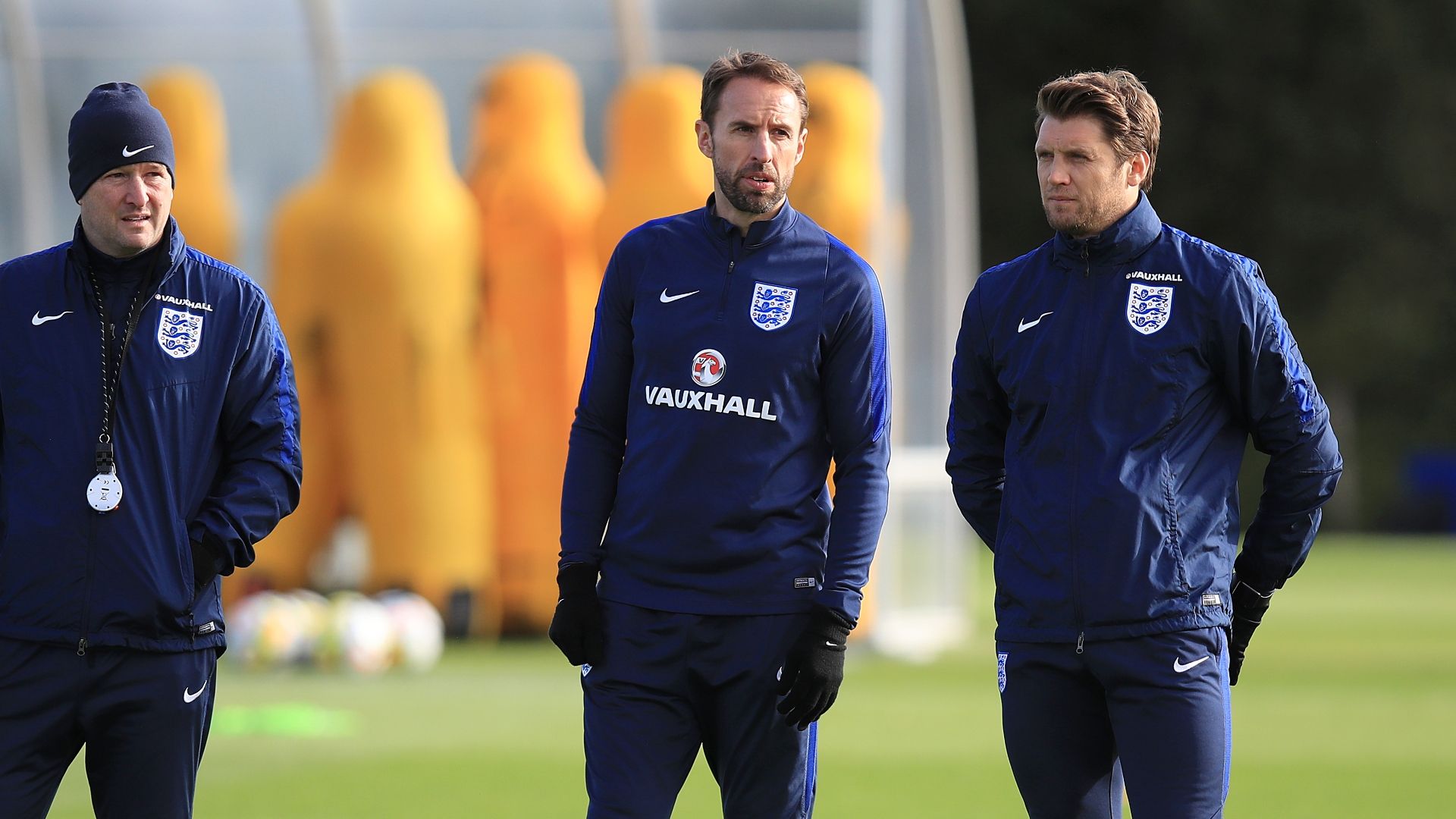 Non-conformance identification from the touchline

Not many people think about the sheer volume of paperwork and documentation that sits behind each football tournament. Every national team must follow FIFA regulations which cover everything from presenting squad identity documents to the FIFA general secretariat, to financial provisions, to marketing and media. Qatar's team was fined £37,000 by FIFA last year. The reason? Wearing the wrong shirts. And that was just a qualifier.

Attending the World Cup takes a huge amount of preparation work for each national team. The England team's management could use Qualsys's document management module to store their administrative documents in a single, secure source with version control and trackable workflows, ensuring FIFA compliance and avoiding financial penalties.

What to do next

To explore the features of the entire Qualsys software solution, visit our modules page.

Need some training yourself? Join one of our highly-rated GRC workshops here. 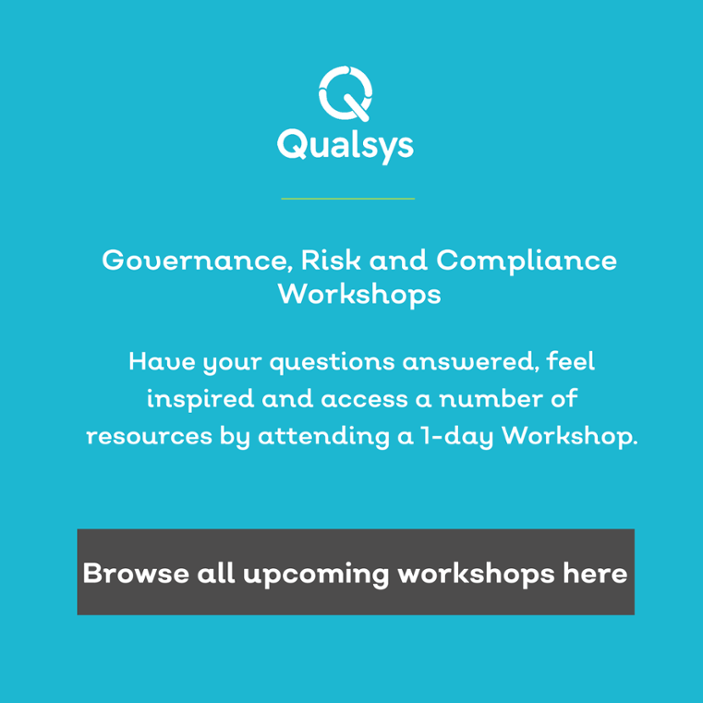 Why Excel and Word files are damaging your quality performance

Using shared folders can seem like a low-cost, quick & easy quality management solution. But they cause more damage than you think. Here's why businesses use EQMS instead. 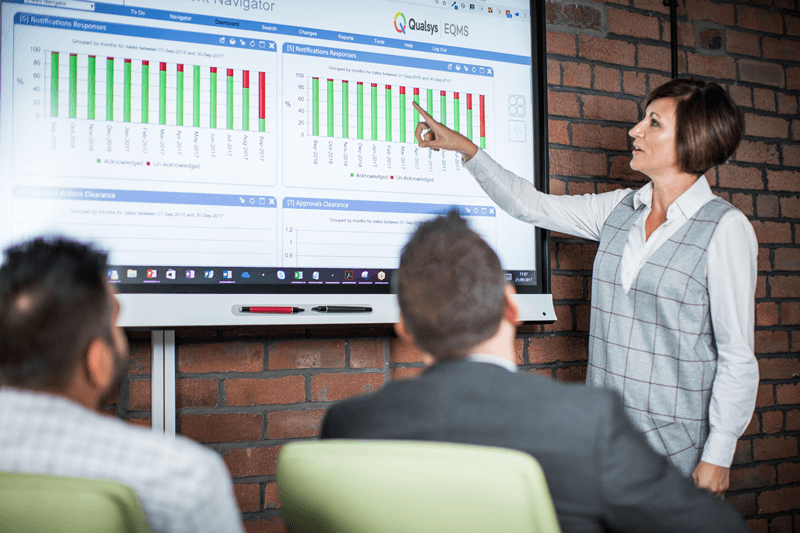 Is your business informatised, or only digitised? For Davor Markota, Managing Director of Quality Solutions, there's a big difference. 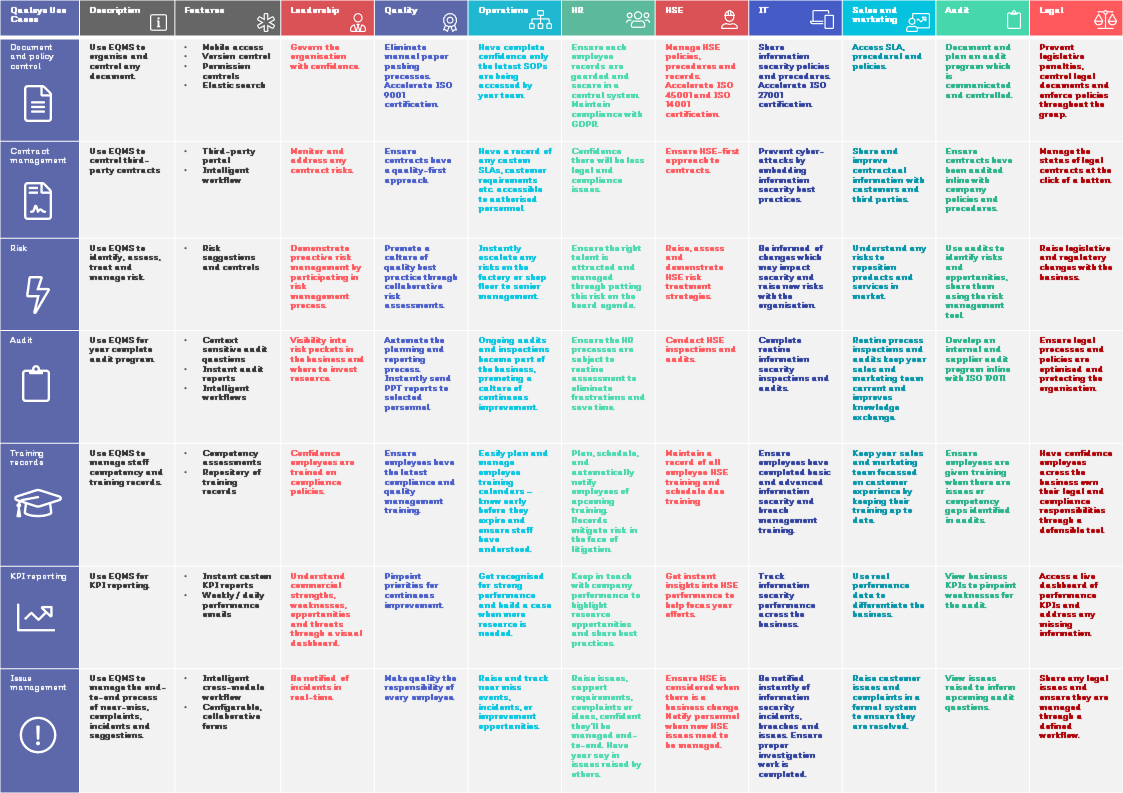 Why use quality management software? Use case matrix

How does each department in the business benefit from using quality management software, exactly? Here's a use case matrix 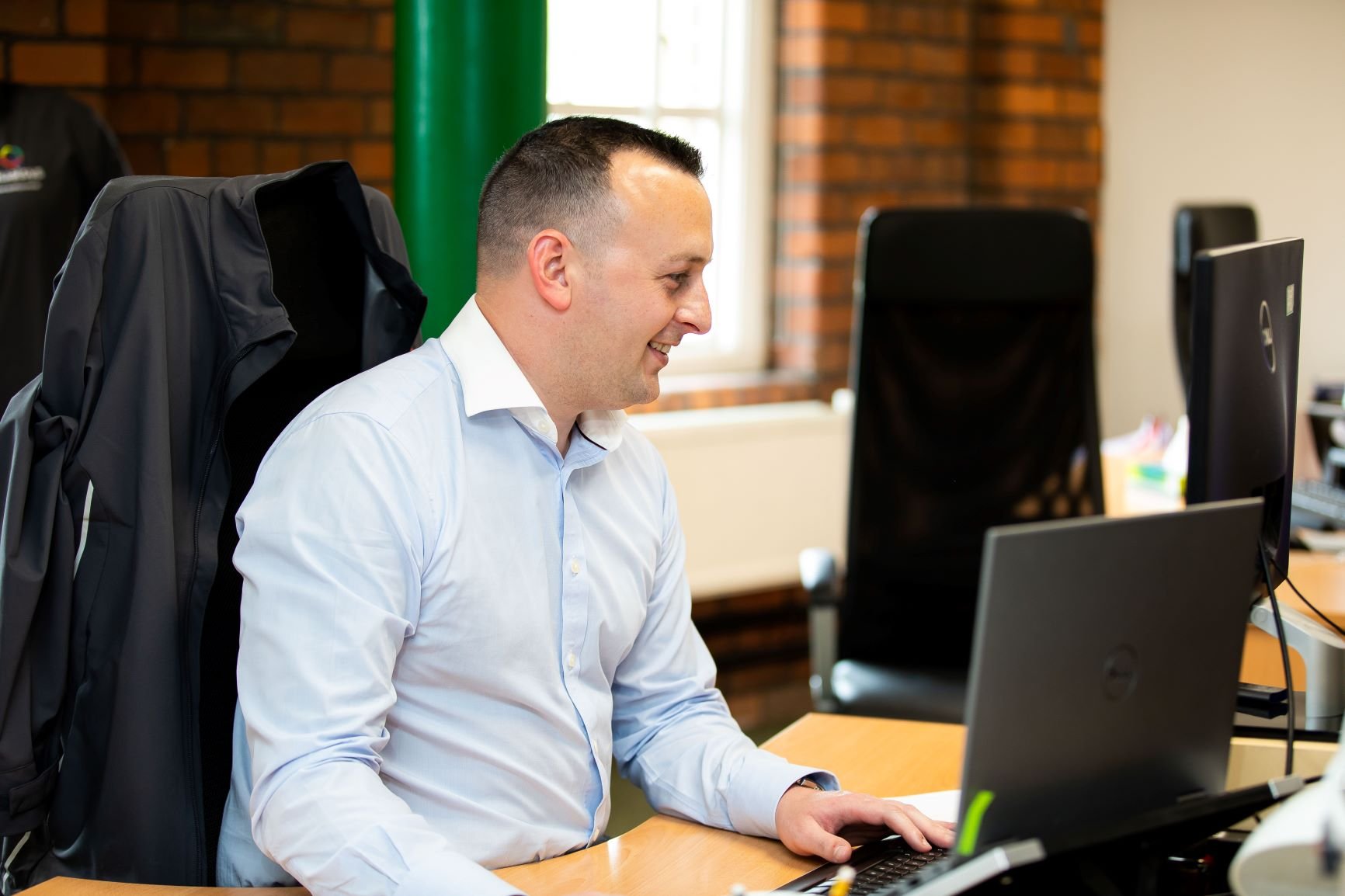 Do you need an integrated electronic quality management system? Here are the top 20 reasons businesses invested in a new tool in 2019.