BT Global Services has used EQMS since 2001, and considers Qualsys one of its strategic partners.

Robert Oakley, Commercial Director at Qualsys, has managed the BT Global Services account for the past 17 years. "BT came to us with the requirement to share documentation with its customers in a controlled way," Robert says. "Key to this was making sure customers and internal employees only saw information they had permission to see."

The first system was implemented in 2001. That quickly grew to eight systems, then 16. Within a year there were 64 different EQMS systems within BT. Each EQMS had a separate database, which meant BT could segregate each of the contracts to prevent any from being shared incorrectly.

By 2005, BT Global Services's procurement team was envisaging a future in which the system would expand much more widely across the business. It approached Qualsys for a strategic solution, and Qualsys put together a contract to enable BT to procure batches of 25 systems at a time. Now, in 2017, BT has over 500 systems.

Robert Oakley adds: "We see BT, like many of our customers, as a partner. We've shared ideas about how we provide solutions within BT, and the system has been propelled by BT over the years. They've had a big influence in driving EQMS forward over the years, and invested a lot to get EQMS to the high standard it's reached today."

"And that value has been passed on to our other customers. It's a true partnership, and our relationship goes from strength to strength. As we speak, a new EQMS system has been launched for a major European bank, and BT Contracting are managing the relationship there."

During the EQMS User Group, Carl Butler, Key Controls Manager at BT Global Services, spoke of how BT are using EQMS for compliance and how the system adds value to its business. Below, you can read the transcript of Carl's presentation.

The 'cloud of clouds'

We made a strategic decision to silo our business into different divisions. BT Global Services looks after global customers.

My team of subject matter experts looks after heavily regulated pharmaceutical companies in North America. At the moment, the team is based in Canada and we look after both their document management and their training management.

One of our key drivers at the moment is the 'cloud of clouds'. While everyone knows what the cloud is, few organisations have the technology, human and financial resources to manage cloud-based information well. BT are great at this.

Security is critical for us. We have the overarching administration system, EQMS, which determines who can administer and see certain documents. EQMS has become embedded in BT Global Services.

EQMS helps us to make sure our relationship with the customer is transparent and that we're sharing the right information at the right time. The customer always has access to their service level agreement, billing information and manuals.

There's always a record of activity, which is essential when managing heavily regulated contracts, such as global pharmaceuticals which are regulated by the FDA. As we're essentially an outsourced business service, the compliance burden falls on us, so EQMS helps demonstrate these compliance requirements. 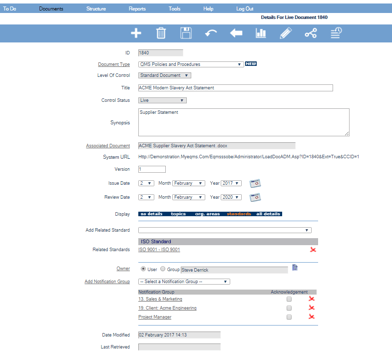 My team are being retrained to be more consultancy-based. This means they'll spend more time with the customer, capturing client information and ensuring we deploy EQMS to the best of our ability. If our sales team need any consultancy, the subject matter expert will be able to provide value to the customer.

We're upskilling our team. This is great for their careers because if you've been doing document management or training management for several years using EQMS, the organisation can use your knowledge as a value-added service.

The value of EQMS at BT

One of the things we've been discussing with Qualsys is what is the value of EQMS?

If you look at all of the industry sectors – banking, aerospace, gas, pharmaceuticals – the unit I work for goes right across the organisation. We're growing rapidly and that means we have lots of new recruits. It's critical that behind all of that is EQMS. Without the automation of EQMS, we couldn't cope.

Before EQMS, it would have been spreadsheets. For BT, managing training records on a spreadsheet when there are hundreds and thousands of employees is impossible. To be a 'qualified person' such as a project manager, technician or Cisco computer expert in a heavily regulated organisation, you have to have a valid training course to work on the contract. With EQMS Training Records Manager, it makes it much faster to manage, retrieve and update training records.

Everything is documented. So when we're audited by the FDA, or another regulator, we can quickly answer questions such as "What kind of network do you have?" and "Who looks after it?". EQMS gives our customers confidence that we're compliant.

In the future, EQMS is only going to grow within BT Global Services. For example, we have a customer who wants to share the risk of the system. There is a lot of trust involved in that.

In all large organisations, stakeholder management is a minefield. With Qualsys, we're currently getting results by articulating the value of the system very well.

To give you an idea of the scale of the operation, Heinz, Mars, Barclays, Deutsche Bank, Microsoft and BMW are all using EQMS. Each of those systems is shared with BT. We can provide further value to our customers by encouraging them to use the system internally and up their supply chains.

What you should do now

If you need a business management system, EQMS is a proven solution not just for large global organisations, but for hundreds of medium-sized organisations. Start by requesting a call back below. One of our team will call you to learn a bit more about your objectives. We have a "fail-fast promise" – so if EQMS is not a good fit for you, we won't continue to contact you.

Keeping the MHRA happy is vital - but so is fixing NCRs and embedding continuous improvement. See how the quality team at Huddersfield Pharmacy Specials gave themselves the time to do both.

Whether it's a near-miss, critical incident or an employee displaying COVID-19 symptoms, your health and safety team need to know in seconds. Here's how.

How Texecom made quality core

We caught up with security system manufacturer Texecom 2 years into their EQMS project.